Can we see heavy Higgs bosons with masses above the ttbar threshold decaying into top pairs above the large continuum QCD background?

Clearly this represents a relatively difficult search compared to your typical resonant analysis. Thats said, it seems important to be sure whether or not anything can be done at the LHC in this particular final state. It corresponds to a large part of i.e. the 2HDM parameter space where you are close to alignment but have relatively heavy new states without large mass splittings. In this case, there are few other ways in which they could be seen at the LHC.

This appears to be one of the more promising scenarios for 13 TeV. A projection study would be interesting. The figure below is the LO cross section for A_0 production in association with ttbar at 13 TeV as a function of the mass for tan beta = 1. 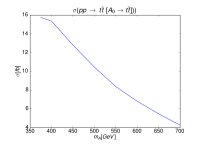 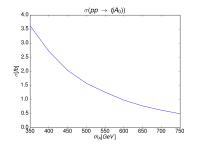 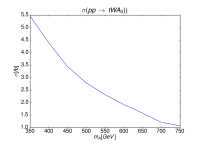 Show as a function of mass for tan beta=1 in alignment for type I, II.

Djouadi et al. discuss A/H→tt in the context of hMSSM (simple and 'model independent' approach). Low tan beta and above the threshold A/H→tt becomes the dominant decay and production cross section is still significant. They stress that this study is needed to fully cover the M_A and tan beta parameter space.

One of the earlier papers discussing this channel. They quantify the peak-dip structure of the signal and emphasise the fact that, depending on the heavy Higgs mass, the total cross section can be reduced, enhanced or stay roughly the same as the SM value. They conclude that the effect may potentially be observed at the LHC if the ttbar mass resolution is smaller than the width of the top.

Maltoni et al. implementation of HZ production in Madgraph5_aMC@NLO. The ZH production cross section looks to be O(1) fb in their 2HDM benchmark scenarios with masses of 350, 440 and 500 GeV. This is to be compared with a recent calculation by Frixione et al. (http://arxiv.org/abs/1504.03446) of the background ttZ process quoting O(500) fb cross sections at LO with additional, non-negligible k-factors.

Out usual suspects return with predictions for associated production of a Higgs with a top. It is shown that this production mode overtakes ttH for masses around 300 GeV.

Recent study revisiting prospects at the LHC finding them not so promising when considering potential detector effects. In the pure ttbar case, they conclude that although with a lot of integrated luminosity, one may have the statistical power to see such a signal, the % level deviations in the tt invariant mass spectrum are likely to be outweighed by typical systematic uncertainties. The bb/tt associated production modes are also explored and are argued to merit further study at 13 TeV. Another potential channel of tH associated production is breifly mentioned (see previous reference).

ATLAS Run 1 search for 4-top production in the single-lepton channel.